Today is the day that some of us look forward to and others dread:  alternate uniform reveal day.  Nebraska will wear these October 24th against Northwestern.*

*Apparently, Nebraska is telling Northwestern “we’ll see your ugly black uniforms, and raise you one.”

Let’s dive in, piece by piece. 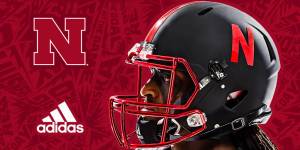 Like last year, the lid was easily the highlight of the ensemble.  When a picture of the matte black helmet with the classic sans-serif “N” was released late Wednesday night, I was cautiously optimistic that I would like this year’s uniforms.

In my opinion, this helmet represents what a Nebraska alternate uniform should strive to be:  different, yet recognizable.  Trendy, yet classic.  Without question, this is my favorite component of any Husker alternate to date.

Could this be the year that I go from grudging acceptance to full-on love?  Could adidas redeem their battered reputation with Husker fans with a grand slam design? 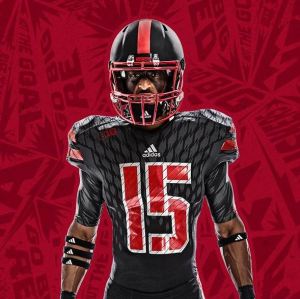 Goodness…where to even begin with this thing?  Let’s start with the pattern in the jersey.  The adidas press release says “the jersey’s padlock system secures tension over the shoulder pads, while the bodymap fit adheres to the player, making it difficult for opponents to grab, hold or tackle.”

Uh-huh.  Sure.  Bummer about not being able to tackle us Northwestern.

You can call it whatever you want.  I say it looks like tire treads, which when combined with the diagonal slits going through the numbers, makes it look like the uniforms were run over by a truck (Wisconsin fans, feel free to insert a Melvin Gordon joke here).

Speaking of the numerals, they are rather reminiscent of the duct tape numbers from last year’s jersey.  Hopefully, the addition of the silver – sorry, “forged steel” – outline will make them easier to read from row 47.  I’m not optimistic.

One of my biggest criticisms of adidas is how they put all of their schools through a generic template and fail to do anything unique – even for a once-a-year special jersey.  For the most part, that holds true:  compare these to the new adidas uniforms for UCLA, Miami, and others.  Lots of similarities, especially the tire tread pattern.  However, I will acknowledge that adidas has finally done something unique for the Huskers, adding the word “HUSKERS” along the side of the jersey. 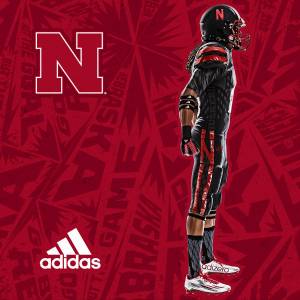 I appreciate the gesture, but all it does is clutter up a jersey that is already too busy.  Next time, replace your tire treads with the outline of the state. 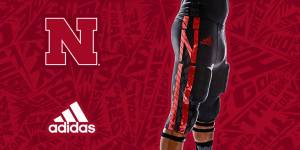 Putting an “N” in the stripe is interesting.  I don’t hate it, but I don’t love it either.

Oh wait, that’s what I wrote a year ago when adidas made the same pants in red.

C’mon adidas.  Make an effort to do something new.  I understand the monochromatic looks are the big thing now, but I wouldn’t mind seeing this with red pants or even the silver – er, “forged steel” – from the outline of the numbers.

Points are deducted for the needless slashes through the stripes and the tire tread pattern.

Let’s start with the cleats. 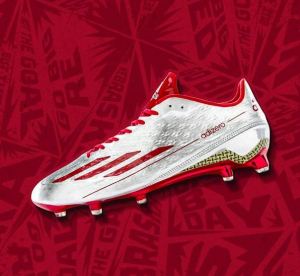 I love them.  Simple, clean, and a dramatic improvement over the 2014 version that looked orange under the lights.  Plus, they have ” a SPRINTSKIN upper with SHOCKWEB reinforcement and a SPRINTFRAME plate that provides maximum acceleration and multi-directional traction”*, which has to be good.

*Anybody else find it ironic that a company whose name does not have any capital letters creates products with the CAPS LOCK glued down?  Just me?

I have a seen a picture that suggests these will reflect very silver on the field, but I’m optimistic that will be okay.  If nothing else, they should take focus away from the ugly patterned dress socks.

Next up is the undershirt – I mean, “TECHFIT gun show baselayer”*. 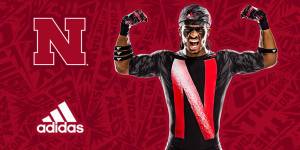 *You wish I was making that up.

As noted uniform critic Paul Lukas tweeted, “I think the red ‘N’ stands for ‘No.'”  I’m not a fan of the tire tread meets camouflage look on the sleeves, but it’s better than the “Z” that was on the arm last year.

Its interesting – at least as far as a discussion on alternate uniform accessories goes – that there are no close up pictures of the gloves.  All of the previous uniforms have had fancy gloves that make an “N” when the palms are placed side by side.  Surely, the new gloves do that – unless there wasn’t room after adidas put in “4-way stretch mesh for compression fit and GripTack 2.0 for consistent control in all weather conditions.”

In what will be a surprise to nobody, I’m not a fan of these.  One last time, let’s go back to what I said a year ago:

I think for 2015, I will need to greatly lower my expectations.  I should expect adidas to provide Nebraska something that is on the line separating flashy and gaudy.  Something that looks like it came off a generic corporate template, instead of being inspired by Nebraska’s rich history.  I should expect a mediocre alternate from adidas, because that is all they have ever given us.

By those standards, adidas delivered 100%.  As you hopefully gathered by the corporate buzz speak that I sprinkled in from the press release, these uniforms are much more about adidas than they are about Nebraska.  Let’s take a look at the whole ensemble from head to toe. 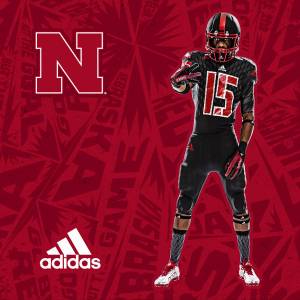 There is very good potential here.  There really is.  I can’t believe my traditionalist fingers are going to type this, but that black helmet may be a keeper.  Silver shoes are silly, but no worse than the neon highlighter shoes many basketball teams wear.

Until Jason Peter says otherwise, I’m still of the opinion that black jerseys should not be worn by 4th string receivers.  That said, I could get on-board with an all-black get up similar to this.  Just simplify the look.  Lose the tire treads, the reflective numbers, the stripes that look like they survived an attack from Freddy Krueger, and you’d really have something nice.

It may not be as #HuskerBold as adidas would like, but I’d wager it would be better received.

[…] 2015:  “One of my biggest criticisms of adidas is how they put all of their schools through a generic template and fail to do anything unique – even for a once-a-year special jersey.” […]