If you have ventured on to any social media platform in the last few weeks, you know that pretty much every person in the world is participating in the Ice Bucket Challenge to raise awareness (and maybe, just maybe generate a donation or two) for ALS.

If you are one of the few people on the planet not familiar with the challenge, it breaks down like this:

The viral popularity of the Ice Bucket Challenge is greater than anything anybody could have anticipated.  Donations are through the roof, awareness is off the charts.  I’m not sure if it could be going any better. 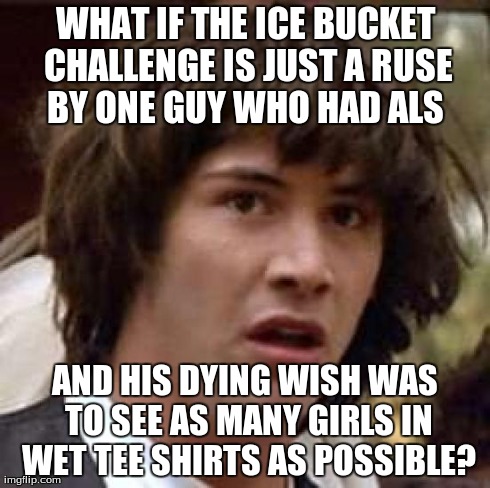 Or maybe it could…

Just imagine if the folks at ALS had decided to go with one of the other challenge finalists:

Author’s Note:  I figured this was a pretty good entry in the WordPress Daily Challenge “Breaking the Ice”.

Recently, I caught wind of a website that raised some controversy.

A couple in Florida wants to adopt.  In order to help defray some of the costs associated with the adoption, they set up a fundraising website where friends, family, and others could donate.

So far, no big deal.  Crowdfunding sites like Kickstarter, Indiegogo, and PledgeMusic have become common ways for people to fund businesses and other projects.  Expanding into adoption fundraising is a logical extension for many of these sites.

But here is the difference:  in order to stand out / have fun / generate buzz, this Florida couple set up a hook.  When you donate on their YouCaring crowdfunding page, you get to specify your favorite NFL team.  The parents vowed to raise their child as a fan of the team with the most donation dollars.  They called their site the “2014 Baby Draft” and even created an intro video.

This is where I need to divulge a very big disclaimer:

I never saw the actual site or the intro video.  By the time I heard about this story, the negative backlash had caused the couple to take down the fundraiser.  I did find this article which tells more about the original idea.

An image from the original Baby Draft crowdfunding site

What type of negative backlash did they encounter?  Again, I’m not 100% sure as I hit the tail end of this.  My guess is the “Baby Draft” name rubbed people the wrong way as it doesn’t really articulate the premise of selecting a rooting interest for the child.  I can see where some folks may have thought the parents were going to draft a baby in the manner that NFL teams draft players – through extensive evaluation, workouts, and analysis – when adoption just doesn’t work that way.  Again, that is my speculation.

As for me?  I probably should be more outraged by it – and maybe I would be if I had watched the video – but I have a hard time getting worked up by this.

Is a “baby draft” in bad taste?  Maybe.  Is it a good idea to place any parenting decision in the hands of an Internet vote?  Typically, no.  Should you question a parent who would truly “sell” his child’s rooting interests to the highest bidder?  Possibly.

But consider the other side…

Is adoption expensive?  Absolutely.  The parents who set up the site estimated their costs at $45,000.  While that’s above the national average for an agency-assisted adoption of a U.S. born infant, it’s easy to see that number if they are adopting internationally.

Is it easy to get grants or loans for adoption?  No.  Certainly, there are many adoption grants out there, but when you get past the ones with strict faith-based restrictions (i.e. married heterosexual Christian families) you are competing with hundreds of other families for the same limited pool of grant funds that may not be paid when you need the money.  Adoption loans are even tougher to find and obtain.

Do most employers offer adoption benefits to help defray costs or provide the necessary time away?  Some do, but they are few and far between.

Do prospective adoptive parents need to be creative with how they raise funds?  Definitely.  You’ll see all types of fundraisers, benefits, and sales.  One blog that I follow has a future adoptive mom decorating cakes to help raise funds.  It’s a cool idea (and she makes beautiful cakes) but it’s hard to imagine raising tens of thousands of dollars in this manner.

Maybe the Baby Draft family was misguided, their intention / motivation was not clearly stated, or they should have used a phrase other than “Baby Draft”, but I can certainly emphasize with their plight.  Our three adoptions were not cheap.  Very not cheap*.  We were able to do it with a combination of strict budgeting by my financially gifted wife, generous loans from my mom, and our good friends at Visa.  And even with all of that, we’re still getting our financial legs back under us 10 months later.

*So not cheap that I can barely afford good grammatical composition for my sentences.

But adoptive parents – present and future – know that despite all of the costs, fees, and expenses, the end result is priceless.

How do things tie together?

As a participant in the Heart Walk, I am raising funds to fight cardiovascular diseases (including those that are prevalent in my family).  Instead of just asking my loyal readers for a simple donation, I have decided to give you something special for your tax-deductible donation:

You see, the Feit men share several genetic traits.  Among them are the ability to grow a great mustache and heart disease.  At least two of my dad’s cousins have rocked amazingly awesome handle bar mustaches.  And several of my relatives (including my dad and grandfather) have lost their lives to heart disease.  As you can see below, I did not inherit the quality mustache DNA, but there is a damn good possibility that I will have heart disease at some point.

Therefore, I am going to trade my dignity for donations.  I will unleash this sorry soup strainer on the world in exchange for your change.  Every $50 dollars donated (over my goal amount) equals an extra day of mustache-y goodness.

The details:
When I signed up for the Heart Walk, they suggested a fundraising goal for $250.  The morning of the Heart Walk (Saturday, April 28, 2012), I’ll shave the goatee down to a gloriously hideous mustache.  For every $50 over that $250 goal, the mustache sticks around for an extra day.  If I raise a total of $500, the ‘stache sticks around for 5 extra days.  Total donations of $1,000 means over two weeks of mustachery.  As you can see, my shame can (and likely will) be purchased.

If you would like to support the Mustache Mustache Challenge, you can donate online at http://share.heartwalk.org/sU992BG using a credit/debit card, ACH, or PayPal.

I thank you for your support.