Stop Complaining About How the Royals are Dominating All-Star Voting

Today, Major League Baseball released the latest voting totals for the July 14 MLB All-Star Game.  Of the nine positions involved in the American League fan balloting, the Kansas City Royals have the top vote-getter at seven positions.  Right fielder Alex Rios, who is just returning from an injury that kept him out for almost two months is fourth among all outfielders.  Second baseman Omar Infante (and his .221 batting average) are currently in second place, trailing the Astros’ Jose Altuve by 150,000 votes – despite this sentiment from Kansas City media:

Royals fans, who would vote Omar Infante out of the Royals' starting lineup if they could, nearly have him in the All-Star Game lineup.

Unless something crazy happens, the Royals will have at least five starters as 3B Mike Moustakas, SS Alcides Escobar, C Salvador Perez, CF Lorenzo Cain, and LF Alex Gordon all lead by over a million votes.

There are many national (read:  East Coast) voices who cannot fathom this Royal domination.  In between their alarmist angst, they blame fans excited with “newfound relevance“, click-happy fans voting dozens of time online, and a host of other conspiracy theories that threaten to ruin the sanctity of the All-Star Game.

All-Star Game's gonna be Trout, Miggy, Cruz, Altuve, & a bunch of Royals you don't care about vs. the NL. SELIG'S BASEBALL, #CatchTheFever.

So what is going on here?

*Hell, for a lifelong fan like me – who suffered through a 29 year playoff drought filled with bad players, horrible management, and inept front office leadership – the idea of the Royals being good is still surprising…but I’m getting used to it.

*Although, it is worth noting that the Royals current sit 10th in MLB (and fourth in AL) in attendance – easily their highest position in years.  When the Royals hosted the All Star Game in 2012 (and ASG ticket priority was given to season ticket holders) the Royals were 25th in attendance.  So even if they still used paper ballots, the Royals would probably be doing all right.

Personally, I’m quite amused by the “anti-Royals fervor” going on as a result of these voting totals.  If you want to fill out 35 ballots without a single Royal, that’s your choice, but consider this:

They are in historically bad slump – which as any Royals fan in the last 25+ years will tell you, is really saying something.  They have lost eight in a row, and 19 of their last 23.  After spending most of April in first place, they are now in last.  In short, something needs to change.

Sure, they could fire Ned Yost, one of their two hitting coaches for a team with several starters hitting below .250 with absolutely no power, or they could replace those lousy batters with a bunch of guys from the minor leagues.  Any of those things might work.  Or they might not.  Given that we’re talking about the Royals, rational changes will probably just make things worse.

The Royals need to think outside the box.  Unconventional.  Drastic measures.

Fortunately, I know how the Royals can win again.  And no, I’m not referring to a “slumpbuster” as infamously described by Mark Grace.  Here are ten ways to help get the Royals back on a winning track:

10.  Through use of wigs, fake mustaches, costumes, and fat suits, Alex Gordon bats twice an inning.

Not really relevant, but I love this picture.

9.  Royal batters only need three balls to walk, but get four strikes.

8.  Opposing team must chug a Boulevard beer at every base.

7.  Cork.  Lots of it.  In the bats, the baseballs, the opponents gloves, in the hotdogs.  Anywhere.  Everywhere.

6.  Manager Ned Yost is replaced with a Magic 8 Ball. 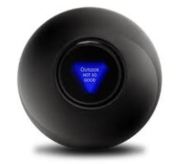 Do the Royals have a hope of winning again?

4.  Mascot Sluggerrr arranges lap dances for player who gets game winning hit.  (I shouldn’t have to mention this, but obviously that link is considered NSFW).

3.  Don Denkinger comes out of retirement to umpire Royals games (especially the interleague series with the St. Louis Cardinals).

2.  Longtime play-by-play man Denny Matthews broadcasts in the nude until the Royals win.

As a baseball fan, I always look forward to the start of the season.  You’ll hear announcers and writers talking about the “hope and potential of a new season” and bunch of other clichés about how everybody believes their team can win the World Series in April.

As a long time Royals fan, my response to that is “Yeah, right.”  The Royals may start in first place on Opening Day, but I’ve seen enough seasons to know that KC’s April will usually go one of two ways:

But the 2013 season might just be different.  General Manager Dayton Moore has built a young, but strong core of position players and spent the offseason bolstering a pitching staff that was painfully bad in 2012.  The Royals dominated the Cactus League during spring training, and are a trendy dark horse pick to win the American League Central.

One month in to the 2013 season, and the Royals have been different.  Good different.  Like, a real big league team with pitching, hitting, and defense different.

And I’m not sure what to do with it.

Let’s not kid ourselves…there is still a ton of baseball to be played.  Five full months and over 135 games, to be exact.  But as I type this on May 1, 2013, the Kansas City Royals are in first place.  They have won at home, won on the road, beat good teams, pounded bad teams, and have generally looked good doing so.  At the risk of jinxing the team, I’ll say it:

If the playoffs started today, Kansas City would be in for the first time since 1985.

But that is looking too far down the road.  I’m sticking to the same thing I said at the beginning of the year:  I will be happy – hell, I’d be thrilled – with 82 wins.  Get over .500.  Anything beyond that is gravy.

Will it happen?  I want to say yes, but history says no.  Regardless, it should be a fun ride.

Call to the Bullpen

“So, the Royals playing dominating baseball and the impending snow in May in KC don’t have anything to do with the apocalypse right?” – TJ Carpenter‏ (@TJCarpenterWHB)