Just realized that I have left my loyal readers dangling on one of the biggest cliffhangers of the season – what is going on with Dave’s mustache?

My apologies if the thought of my hairy upper lip has kept you from focusing on work, school, or family.  Without further ado…

For Day 3, I shaved off the soul patch and removed the Fu Manchu sides, resulting in a more traditional stache.  Personally, I think it made me look less like a weirdo and more like some guy trying desperately (but failing) to look good in a mustache.  Somebody at work said that it looked “like a policeman’s mustache”.  I have no idea if that is a good thing or a bad thing – but it did give me a craving for a doughnut*

*buh-dum-cha.  Aside from being an overly easy joke, it is true, I do crave a good doughnut every so often. 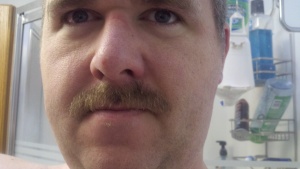 Fortunately for all involved, Day 3 was the final day of the Challenge.  My supporters were generous and good sports, but all good things have to come to an end.  For me, that means going to a cleanly shaved* face for the first time this year.

*I want to use “shaven” there, but it just doesn’t seem quite right.  Judges?

So what did we learn in this little fundraising adventure?  Several things: